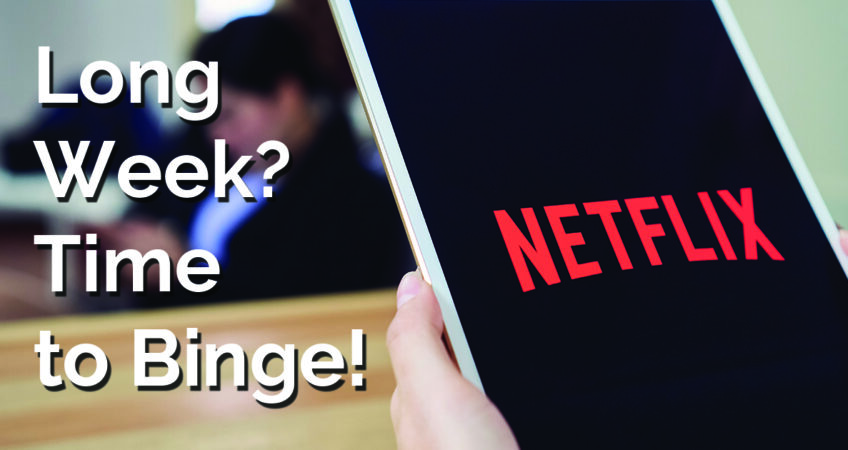 Best Netflix Shows to Binge After a Long Work Week

In desperate need of some couch time this weekend? We feel ya. Turn your brain off and enjoy some of our favorite binge-able series available to stream on Netflix right now.

Okay, this might be a biased choice. Mad Men is a romanticized depiction of what it was like to work in the smoky, booze-fueled world of advertising on Madison Avenue in the 1960s. So much about this show is great. It’s retro, but somehow relevant at the same time. Elisabeth Moss’ portrayal of Peggy Olson, a secretary-turned-copywriter who struggles with an unplanned pregnancy and patronizing colleagues seems like it could have taken place in today’s world, not 1960. All in all, Mad Men offers something unique – a TV show that feels smart, but simple. At the end of the day, it’s just the everyday lives of people in an office. Don’t let that fool you though, you’ll be hooked five minutes into the first episode.

Arguably the most under-appreciated show to ever air on television, Freaks and Geeks is a glorious one season ode to 80s nostalgia that first introduced us to James Franco and Seth Rogen. The life and times of the students of McKinley High play out through the lens of the geeks, the freaks and the bullies alike, all set to a soundtrack filled with the likes of Joan Jett, The Who, and other rock icons. In short, this show oozes teenage angst in the absolute best way.

Another victim of early cancellation, Arrested Development packs an almost ridiculous amount of hilarity into the three original seasons. Netflix has since added a fourth and fifth season, but you really have to start at the beginning to fully appreciate the antics of the Bluth family. The story of a wealthy family whose patriarch makes some questionable business decisions and ends plunging the company into financial turmoil quickly turns into arguably the funniest network sitcom since Seinfeld.

Twin Peaks is the opposite of a crowd pleaser. It’s weird, it’s haunting, but if you stick around, it becomes one of the most intriguing series of all time. The action starts when Agent Cooper arrives in Twin Peaks to investigate the murder of homecoming queen Laura Palmer. Sex, drugs, murder, and a strange woman who carries around a supposedly psychic log around with her combine to deliver one of the most complicated murder cases of all time.

So much is great about The West Wing. But especially in today’s political climate, it helps to take a step back and immerse yourself in a world where the decisions are hypothetical, the players in the political machine are approachable, and nothing seems so divisive. The Bartlet White House is a truly idyllic picture of an American presidency. Democrats and Republicans work together, the staff is young and optimistic, and above all, there’s a sense of patriotic optimism that isn’t at all inauthentic or forced. Plus, we get the added bonus of seeing a young Allison Janney perform a jazzy rendition of “The Jackal”.