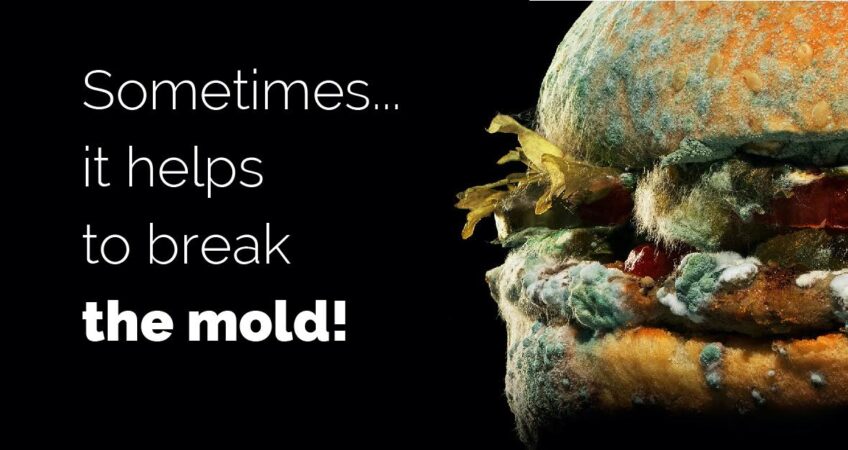 Let’s Talk About That Moldy Whopper

The idea is to highlight “the beauty of no artificial preservatives” through incredibly crisp photo and video. They’re really not holding anything back here, and as time takes its toll on the Whopper, the result is anything but beautiful.

The TV ad opens on a Whopper being meticulously constructed for a photoshoot before simply being left to the elements for a period of time (34 days to be exact) all while the ingredients slowly wilt and, before long, become completely engulfed in mold. The work is designed to promote Burger King’s pledge to remove artificial preservatives from all Whoppers sold in U.S. locations by the end of the year.

This is a bold plan, and one that takes a pretty clear stab at Burger King’s largest competitor – McDonald’s.

After Iceland closed the doors of its last Golden Arches franchise, they decided to save a single cheeseburger and see how time would take its toll. Now more than 10 years old, the last McDonald’s cheeseburger sold in Iceland is curiously just about as photogenic as it was on the day it was sold. In fact, you can still take a selfie with it.

This is a dramatic way to address the use of preservatives in our food, but we shouldn’t be surprised.

The company is already known for its provocative ads, generally peppered with some sort of social commentary. Earlier this year, the burger chain pointed its sights at KFC with their ‘KFG’ campaign introducing their new grilled chicken sandwich. For the first few seconds of the commercial, you’re tricked into thinking the fried chicken chain is behind the seemingly down home ad. There’s banjo music and southern accents and – wait – is that the King or the Colonel? It’s funny, it’s smart, and it works. Just like I’m sure the ‘Moldy Whopper’ campaign will.

Sometimes, it helps to break the mold.